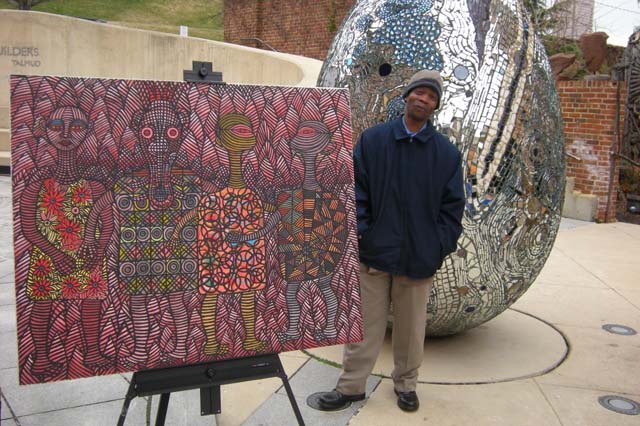 Artist Ephrem Kouakou lives in Baltimore. He is one of the world’s premier contemporary African artists, a spectacular and prolific painter known for his bold use of color and powerful, visionary paintings. His works are in the permanent collections of The Metropolitan Museum of Art in New York, as well as the [pullquote_right] “The mirror of the invisible”[/pullquote_right]Smithsonian National Museum of African Art, and Fondo Del Sol Museum, in Washington DC. An exhibition of over 35 new paintings is currently on view at Still Life Gallery in Ellicott City, Maryland. His life story is fascinating and inspiring. Despite having been born into a large, poor family in a small village in Ivory Coast of Central West Africa, he went on to attend the best art academies in France before making his way to the United States to become one of the world’s foremost African artists. Born in May 1962 in Toumodi, Ivory Coast, Ephrem is a member of the Baule Tribe of the Akan people. As a youth he trained to be a Baule Medicine Man. Learning the mystic mask ceremonies, dances, and rituals of the Baule people came naturally to him. His visions were powerful and prophetic. In Baule culture, visions and dreams are regarded as real. He learned to pass through what he calls“The Mirror of the Invisible” to communicate with the spirit world. His visions had great depth and power. He was recognized throughout his village as a powerful mystic. While communicating with the spirits Ephrem began to paint. He felt that the spirits were acting through him, compelling him to paint, and guiding his brush. But the Baule people do not have a tradition of painting. Ephrem’s paintings were visions that his fellow villagers were not prepared to share. After much turmoil, Ephrem set out alone to support himself as a painter in the big cites of Ivory Coast at the age of twelve. He traveled from city to city throughout the Ivory Coast painting murals, signs and various artworks, while attending art schools. When he was seventeen, he decided he had to emigrate abroad to further his education. With thousands of dollars in cash strapped to his body under his clothes, Ephrem walked and hitchhiked over 2,000 miles across North Africa to Algeria. It was a dangerous journey that took over three months, but Ephrem made it for his art. Once in Algeria, with the help of the Ivorian Ambassador, Ephrem was able to get a visa for France. With his visa and plane ticket in hand, Ephrem flew to France with only a few dollars left in his pocket. But he had something more precious than money-he had his catalog of work consisting of hundreds of paintings and murals, and dozens of letters of recommendation, all meticulously saved for the day he was to be admitted to a world-class art school. After arriving in Angers, France, Ephrem managed to persuade the administration of L’Ecole des Beaux Arts, Angers to admit him. Ephrem went on to attend L’Ecole des Beaux-Arts de Aix-en Provence, and finish his education at one of the best art academies in the world, L’Ecole Nationale Superieure des Beaux-Arts de Paris, where he was awarded a trip to tour the great museums of Holland in recognition of his outstanding talent. Ephrem had many shows in Europe before coming to the United States, and was well known in diplomatic circles, as many of his shows were in embassies. Shortly after his arrival in the USA, Ephrem’s great talent was quickly realized by such art luminaries as Philip Ravenhill and Lois Mailou Jones. Ephrem’s career quickly took off. He work is many public and private collections internationally. Ephrem is driven to paint; it is the breath of life for his spirit. While painting Ephrem enters a trance- like state and sees visions of a world that exists parallel to our own. The world of the spirits communicates through him, to speak to our world. His paintings speak profoundly to many of us. For more information on Ephrem Kouakou please see his page at:

For more information on Ephrem Kouakou please see his page at: http://www.stilllifegallery.net/artists/ephrem-kouakou/